We have enemies inside the Church too.

When priests and nuns teach you to show "mercy and compassion" which has become code for "tolerating the sin of the person", then tell teach them the "truth in charity".

Don't be like other priests who are quick to draw the gun and curse you online with words like TANGA, BOBO, PULPOL!

We do not tolerate sin. 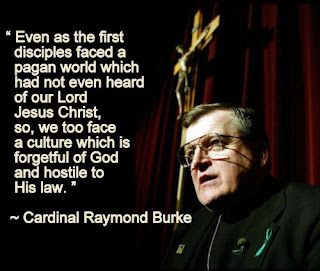 "We as Catholics have not properly combated (the culture) because we have not been taught our Catholic Faith, especially in the depth needed to address these grave evils of our time. This is a failure of catechesis both of children and young people that has been going on for fifty years. It is being addressed, but it needs much more radical attention... What has also contributed greatly to the situation is an exaltation of the virtue of tolerance which is falsely seen as the virtue which governs all other virtues. In other words, we should tolerate other people in their immoral actions to the extent that we seem also to accept the moral wrong. Tolerance is a virtue, but it is certainly not the principal virtue; the principal virtue is charity... Charity means speaking the truth. I have encountered it (not speaking the truth) many times myself as a priest and bishop. It is something we simply need to address. There is far too much silence — people do not want to talk about it because the topic is not 'politically correct.' But we cannot be silent any longer."    -     Raymond Cardinal Burke

Posted by Pedro Lorenzo Ruiz at 10:30 AM