The Archdiocese of Manila website posted photos of the Blessing of Liturgica, a shop that sells Catholic liturgical items in SM Megamall.

The text of the invitation for the blessing of the shop, signed by Fr. Genny Diwa, the archdiocesan Minister for Liturgical Affairs.  Weird that the online letter says he is the Director Archdiocesan Office of Communications.  I think someone forgot to edit the pro-forma letter, eh?

Well, anywho, here is the message of the letter:

It has been our experience at the Archdiocesan Liturgical Commission to receive inquiries and calls from priests, religious and lay, from our archdiocese and from other arch/dioceses in the country, on where they can get some needed liturgical item. [Huh?!  I guess they did not know about a LOT of tailors and metal workers who do great works in liturgical arts.  Maybe the Commission does not want them to go to these stores?  Hmmm?  Dan Brown conspiracy?  Nahhh.  More of this later.] We are glad there are places and shops that we can refer them to [I am not sure if the shops I will refer later are those that they actually refer.] but we have also come to realize that more shops of this sort are needed.

It is in connection with this that we invite you to the blessing of LITURGICA, a shop or house where various liturgical items can be obtained such as liturgical vestments, books, publications [BOOKS!!! PUBLICATIONS!!!! LITURGY!!! ANSCAR!!!!] and CDs on the liturgy, and other paraphernalia used in the liturgy. It is touted as a one-stop shop. [One stop shop? Of anything liturgy?  So does this include items of the traditional Mass?  We'll see.]

So now let's look at selected photos of the shop courtesy of RCAM.org.  Why do I get this feeling that the Liturgy Commission is running the Archdiocese's website?

The inside of the shop and the people who attended the blessing.

The Tabernacle is on the side AGAIN!!!  I know...it does not have the Lord in it.  But this set-up says a lot!

Can you not see how the liturgists try to make a parallelism between the presider's chair and the Tabernacle?  Geez....after the Year of the Priest and naming St. John  Mary Vianney the model for all priests on loving ministry and the Eucharistic Lord, you would think THIS would not happen again?  Hah!  Wishful thinking Pinoy Catholic!

Ho-hum overlay stoles.  The St. Joseph the Worker stole is nice, though.
Guess when this will be used?  Duh!

White Chasuble with an overlay design most oftentimes mistaken as a stole or what some would call "pallium stole" or "center stole".   There is no such thing folks.  According to the GIRM, stoles are worn under the chasuble.  Only in exceptional cases should it be worn over the chasuble.  This overlay designed-stole can still be used provided that an inner stole be worn inside.  Looking at the embroidery and the design, it is a nice handiwork and the material is probably the same used in a Barong Tagalog.

Ho-hum chalices and patens.  Well, better than the water goblet!
***
As I mentioned above, there are some shops who do excellent liturgical vestments.
Here they are:

Talleres de Nazaret
You may visit their website.  Actually some of their work is sold at Liturgica but these are the ugly ones.  Go to their website and you can find excellent Roman chasubles.  I have personally seen the Roman chasubles and maniples and traditional copes they make and they are EXCEPTIONAL!  BUT!

Talleres is VERY PRICEY and the craftsmanship is not as excellent as I have seen done by smaller shops, staffed and owned by la people.   The people who work there need something to buy their daily bread, no?  Here is a screenshot of the chasubles. 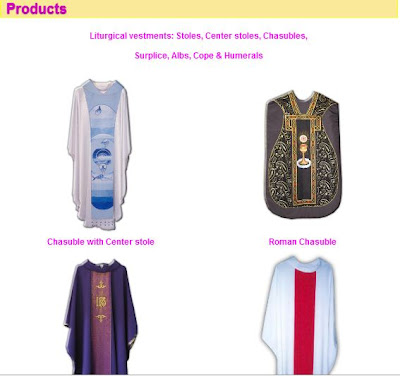 Here is the profile of the company according to their website:

Paulus is a family-owned company started by the late Gerardo S. Salazar(†) in 1999. It started as Ecclesia Manila and was changed to Paulus Fine Liturgical Vestments following Jerry's untimely demise in 2006.

Today, our family steadfastly pursues the lifelong interest in embroidery, art and design together with a love of worship sparked by Jerry during his life as a designer and servant of the church. Paulus is now being managed by Marcela S. Salazar.

You can come to custom tailor your vestments in our studio located at 5421 Marcelo H. Del Pilar Street, La Huerta Paranaque City, Philippines. Or you may contact us directly through this website.

Here are sample works of Paulus: 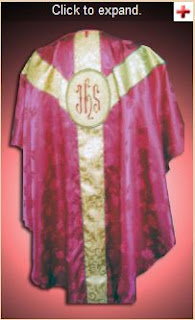 I also know of one from Bulacan who makes very great vestments also.  I cannot find her contact details.  I will post this as soon as I get them.


Try this one instead!  You can have the best traditional vestments here.

And for your sacred vessels!


They really do good work. And the insides of the chalices are gilded in REAL silver and/or  gold.  Excellent attention to details also!
Posted by AAA at 9:10 AM