What's up with these "crucifixes"?

From my first blog post about those ugly crucifixes in Japan, come this other ugly one.

They do not even show the bitter passion of our Lord?

How can they even be considered a crucifix or a representation of the Passion of the Lord?

They look like a doodle of a 2nd grader in one of his notes, done because of his boredom in class!

It might have probably come from the same "artist" who gave us the twisted wire crucifix.  Probably.

What you have here folks is the continuing saga of the Japanese Catholics to have a decent looking crucifix in their churches and chapels. 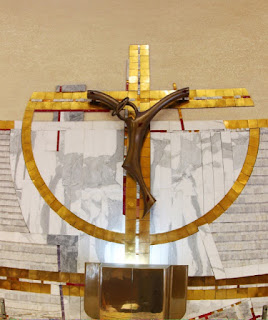 Venerable Pius XII wrote in his encyclical on the Liturgy "Mediator Dei":


62. Assuredly it is a wise and most laudable thing to return in spirit and affection to the sources of the sacred liturgy. For research in this field of study, by tracing it back to its origins, contributes valuable assistance towards a more thorough and careful investigation of the significance of feast-days, and of the meaning of the texts and sacred ceremonies employed on their occasion. [Here the brilliant theologian-liturgist-diplomat Pope explains that the purpose of liturgical research is for the understanding of the texts and feast days and NOT how the Chupungcan liturgists have been doing it, telling us go back to how it was done in the catacombs!]  But it is neither wise nor laudable to reduce everything to antiquity by every possible device. Thus, to cite some instances, one would be straying from the straight path were he to wish the altar restored to its primitive tableform; [No thanks to Vatican 2!] were he to want black excluded as a color for the liturgical vestments; [the GIRM does not exclude it yet liturgists frown upon it like a demon-possessed human seeing the crucifix!]  were he to forbid the use of sacred images and statues in Churches; [do seminaries and retreat houses look like this?  Oh, I remember!  That Pyramid in Katipunan! And it was reportedly designed by the dean Filipino theologians!] were he to order the crucifix so designed that the divine Redeemer’s body shows no trace of His cruel sufferings; and lastly were he to disdain and reject polyphonic music or singing in parts, even where it conforms to regulations issued by the Holy See. [Thank the inculturated songs of Chupungco - Diwa - Francisco!]


We have these images to remind us what happened.

Will the Passion of the Christ movie by Mel Gibson generated that much attention from both critics and moviegoers alike if it were less gory and violent?  Will it evoke the emotion that a real crucifixion would have if it were less bloody?

How will you ever see the wounds brought about by our sins in this kind of crucifix?

How will you ever see how the Lord suffered if His Face is represented this way?

These kind of rubbish, childish art doesn't and should never ever have a place in our houses of worship, nor in any Catholic homes for that matter!

In fact, this kind of art belongs to those who do not want to see, reflect and be touched by the bitter Passion of the Savior!

Blame Fr. Diwa and other proponents of Communion in the Hand! 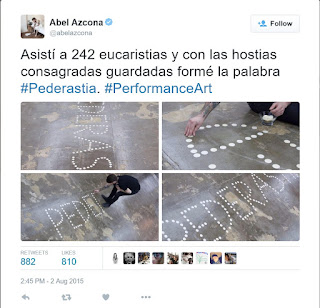 This is a screengrab of the "performance artist's" (ring a bell?  Yup. Carlita Celdran the tour gay of Intramuros.) Instagram account proudly showing his "art" in the form of the not-so-politically correct way of sending his message.  He claims to have collected "242 pieces of consecrated hosts" which he used to place on the concrete pavement to spell "pederasty".  You can read more about this here.

For the uninformed, Pederasty is the homosexual activity between a man and a pubescent or adolescent boy, or in today's language, before the age of consent.  This became prominent in the 6th century especially in Athenian Greece. It was evidently a jab against the Catholic Church and the sex abuse scandal.  It was evidently implying that there is a culture of pederasty in the Church.

To dissect this event we can look at it at both ways.

The Celdranite says that he was able to collect the hosts by attending Mass.  If we put that in numbers, he would have at least attended every single Mass every day for a whole year to accomplish that.  How would the hosts not deteriorated?

If he attended Mass 4 times in a day, it would have taken him at least 60 days to accomplish that collection.  If that were the case, does this guy even have a real job? Or he does

Or it could be that these hosts are not actually consecrated and are just used for publicity.

Well, the "artist", the organizers and the City Council of Pamplona who allowed this to happen got the publicity they got as lawsuits left and right are filed against them.

Which now begs the question...

Will this "collection" ever happen if Communion were distributed on the tongue?

News of host desecration, hosts being found under pews and on the floors of churches and chapels continue to abound.

And we have liturgists who flaunt their degrees and certificates in Liturgy but do not do anything against liturgical abuse?

I'd blame them for this!

I'd blame them for the continuing lost of the sens of the sacred of the people!

I'd blame them over and over again!

PS:  And we have seminarians being trained this way! 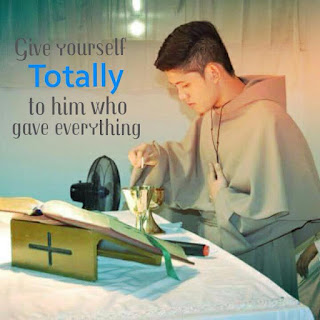 If we have future priests like this, God save your Church!