The Misa ng Bayang Pilipino is an ILLEGAL rite!

Even if the great fluffy Cardinal Archbishop of Manila has celebrated it, the rite for the Mass called Misa ng Bayang Pilipino (MBP) celebrated during the Philippine Conference on the New Evangelization did not receive a recognitio or even a provisional approval from Rome.

This is the plenitude of episcopal powers that Peter holds.  Vatican Dicasteries especially the Congregation for Divine Worship and Discipline of Sacraments (CDW) clearly has the mandate from the pope to see to it that the Mass and the sacraments are celebrated according to the liturgical books.

This Mass, invented in the office table of the late liturgical innovator Fr. Anscar Chupungco, has been lingering the the CDW's shelves for so many years, it is only academic (pun intended) to say that this invented Mass is not approved by Rome.

It was even proposed by Fr. Chupungco that it be celebrated during World Youth Day 1995 here in Manila but John  Paul II did not approve of it.  Even the liturgical master innovator Archbishop Piero Marini did not support it.  Notice how only liturgical dance was added to the concluding Mass.  And that was enough to make us all cringe.

But suddenly, they almost held the Dominicans of UST at gunpoint, forcing the friars to stand silently by the sides while the ILLEGAL MASS called Misa ng Bayang Pilipino is celebrated.

Tell me, since when was the crucifix held like this by the main celebrant during the opening rites of the Mass, huh? 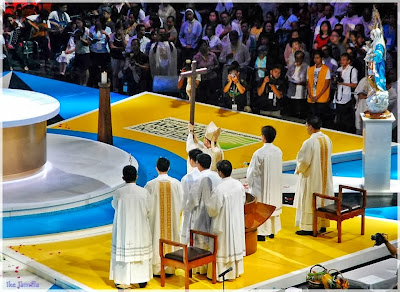 Fr. Diwa reasoned that the crucifix is the most common image found in Catholic homes, that is why the crucifix is brought forth at the start of the illegal Mass.  Really?  Is this really inculturation?  When was the last time Fr. Diwa seriously visited a Catholic home.

Visit any Catholic home and chances are you'd first find either statues of the Sto. Nino of Cebu, Black Nazarene of Quiapo, a Mother of Perpetual Help icon and even a Buddha in the family shrine than a crucifix.

Now you know how sloppy these liturgists are.

"But TPC!  Cardnal Tagle celebrated it!  He is a priest!"

Yeah!  Even Martin Luther was a priest and look what he did.

Priests like Fr. Diwa are bad examples to the youth.  They openly teach children that it is OK to disobey the law and to find creative ways to get around it.  In Tagalog we call it "magaling magpalusot".

Law breaking is never an in thing.

If we have priests like Fr. Genaro Diwa openly disobeying the liturgical laws of Holy Mother Church, who needs Protestants?