Pope declares a new Doctor of the Church!

The Holy Father has declared St. Gregory of Narek as the newest doctor of the Church!

Read about the great news here. 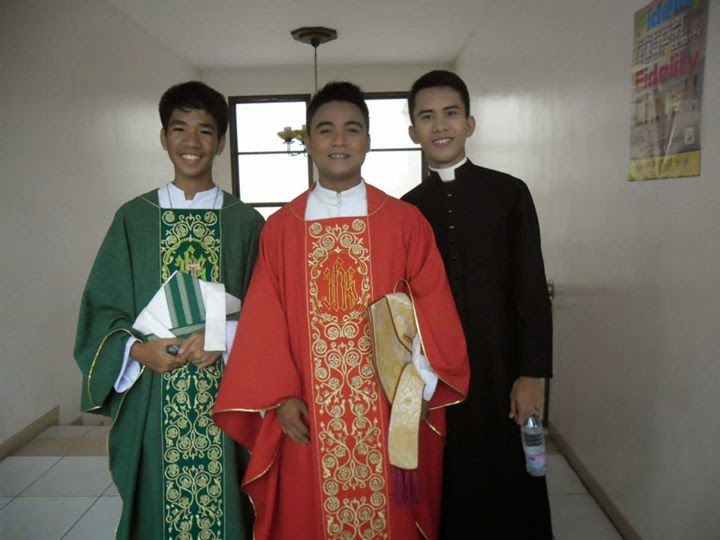 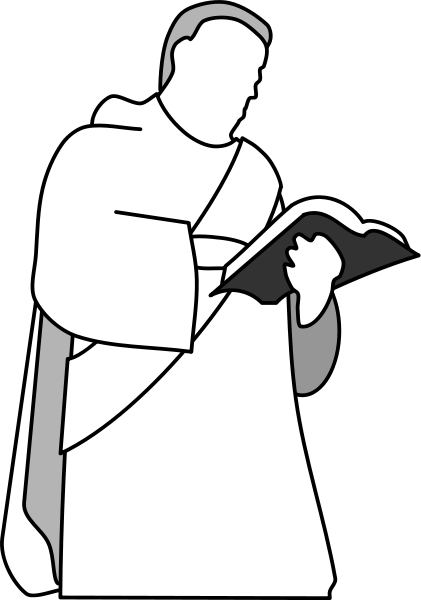 Email ThisBlogThis!Share to TwitterShare to FacebookShare to Pinterest
Labels: Catholic CosPlayers, From a TPC reader

Newest Basilica in the Philippines

Posted by Unknown at 6:41 PM No comments: 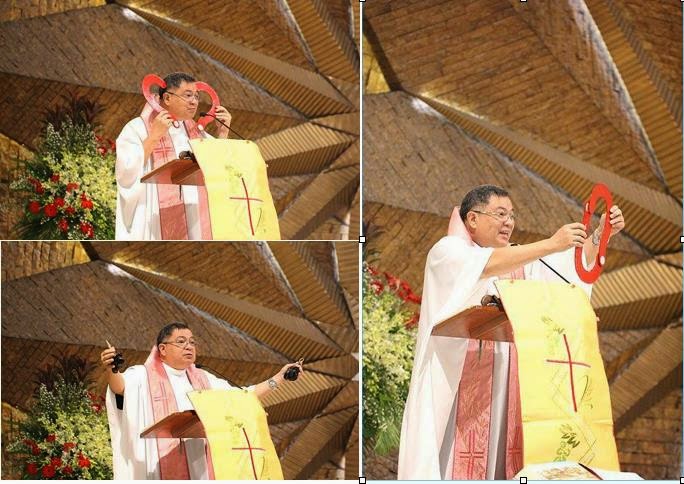 Ears, shell, heart. Ganito na ba kababaw ang mga Salesians? Anyare?  He and all Filipino priests should learn from the new Homiletic Directory published by the Congregation for Divine Worship and the Sacraments.

This is approved by Pope Francis himself, kaya don't ask me where is mercy and compassion by following a document from Rome. 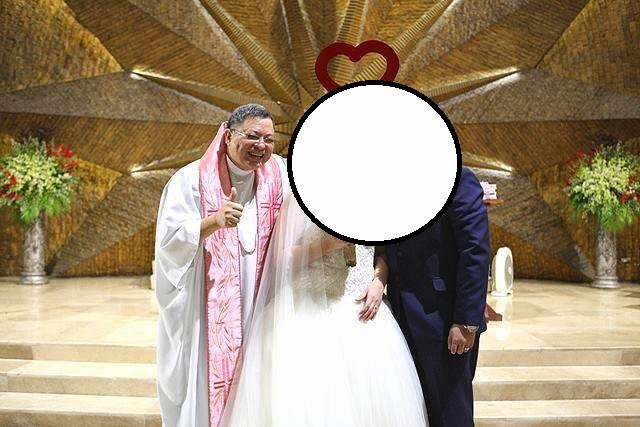 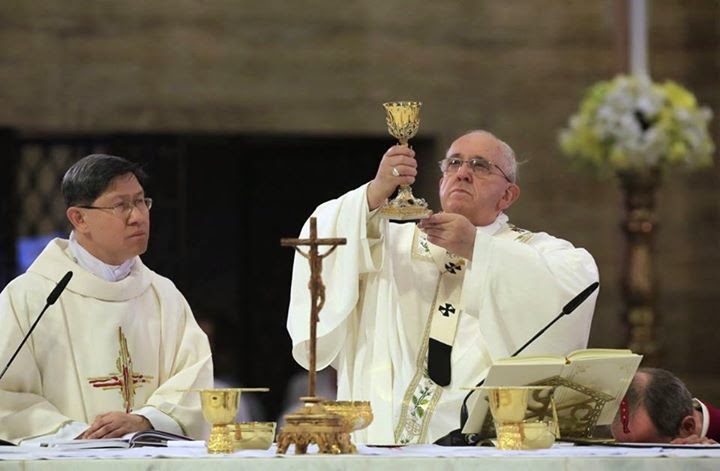 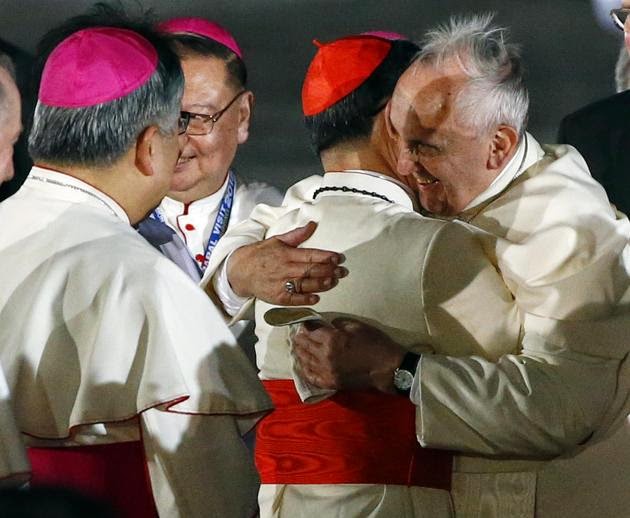 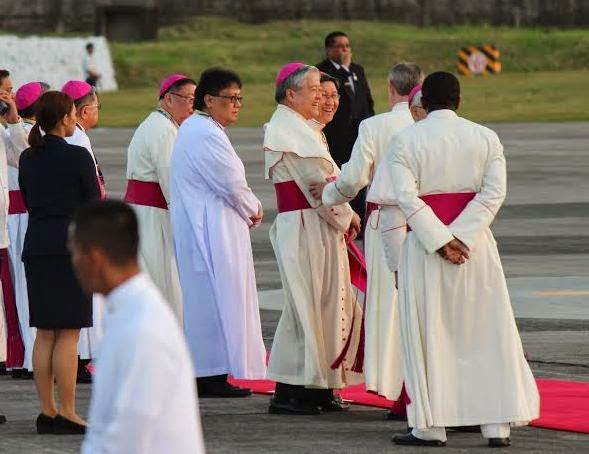 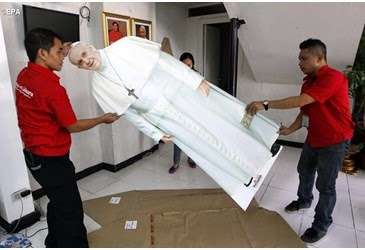 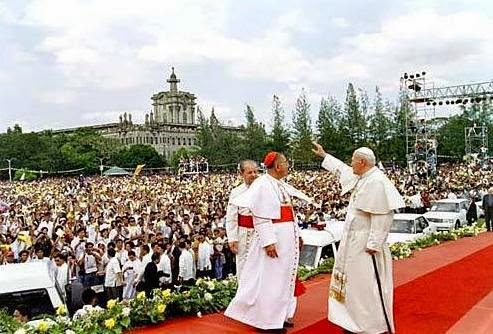 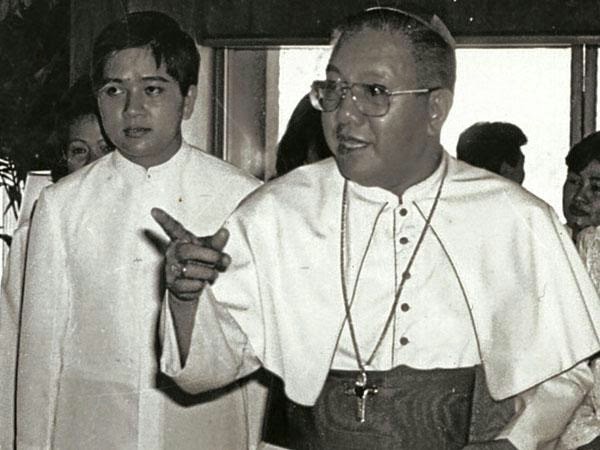 "Francis is not Pope" priest gives a talk in Manila

Last week, nasa Manila si Father Paul Kramer. He gave a talk on Ecclesiastical Freemasonry and the Crisis in the Church. 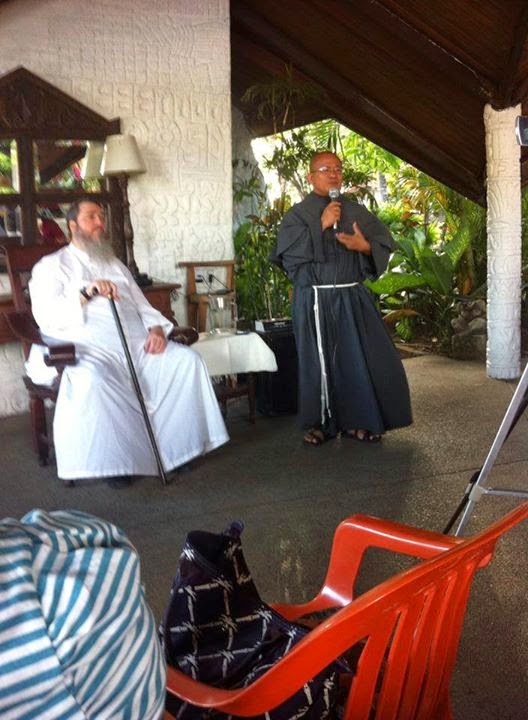 Image above shows Father Paul being introduced by Father Elijah Pantorilla, OFM CONV to the attendees of the talk in a private residence in Manila. 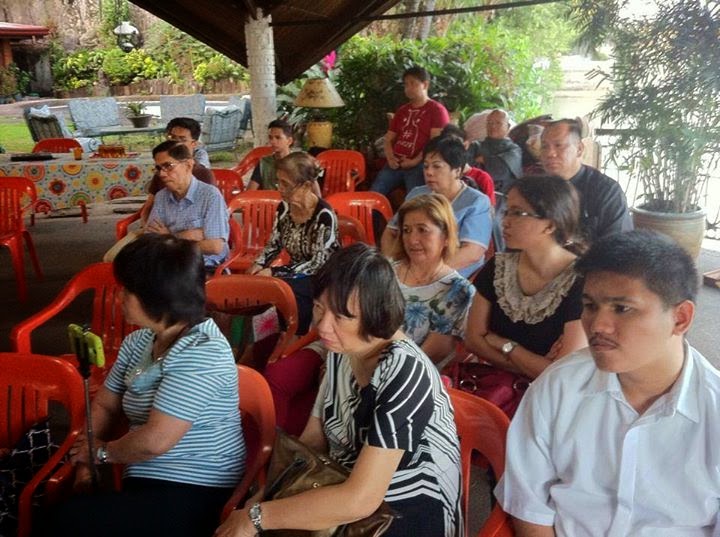 Next time you receive an invitation to attend a talk by this priest, DON'T ATTEND.

Email ThisBlogThis!Share to TwitterShare to FacebookShare to Pinterest
Labels: From a TPC reader, Old Manila, sedevacantist

Heretics influencing the Synod on the Family?

Peace brothers and sisters in Christ!

Hope you are all doing well in this New Year, as we remember also our bishops who passed away in the last five years.

It is Christ the Light of the Nations we celebrated yesterday, that will bring a new Spring to the Universal Church, and our Church, the ECCC has gained momentum and respect by many Roman Catholic movements as they see in us a valued partner to continue for Church reforms.

As Consultor on the Catholic Reform Movement, including members as Hans Kung, etc. of the board, I will be in Rome prior to the worldwide Synod, and we look forward meeting Pope Francis in order to foster the Dialog for Reforms.

If you have a moment, would you consider to sign the letter for Pope Francis as many around the world doing it right now.

Here is the link. The line, "the voices of the faithful..." was my recommendation for the letter :o)

It needs to be signed before February 7th.

Please copy the link below, and put in to google and the letter will appear.

That is the letter of a bishop named Karl.  But who is this Karl?


He is the founder and primate of the Ecumenical Catholic Church of Christ of Detroit, Michigan.  The main characteristic of this sect is to promote "marriages" for all kinds of male and female homosexuals.


Here he is seated in the front row during the Mass of Pope Francis in St. Peter's (far leftmost).

Shall I continue to tell you that it is a schismatic and heretic church?

What is disheartening is that Rodig bought in 2007 from the Archdiocese of Detroit the closed St. Anthony Catholic Church and converted it into his own cathedral.  Imagine if the traditionalists would attempt buying this Church!

His group, part of the bigger group called "Catholic Church Reform International" met in Rome in October before the start of the Synod.  They had and among them, as reported by the National Schismatic Reporter aka Fishwrap:

Among other speakers at the event Thursday were Vatican analyst and NCR columnist Robert Mickens and Benedictine Sr. Mary John Mananzan, an academic philosopher and Philippines native who serves as the national chairperson for GABRIELA, a network of women's organizations in the country.


Yes, THAT nun.  We told she is heretic

Among those in the program is Hans Kung (need we say more) and former priest Roy Bourgeois.

Common denominator?  For women priest, for contraception, for married priest, for homosexual unions.

Franz-Peter Tebartz-van Elst, the former Bishop of Limburg who triggered a scandal over the cost of his lavish bishop’s residence, has been given a new assignent in Rome: he will hold a catechesis-related post in the Pontifical Council for the Promotion of the New Evangelisation.

Posted by Pedro Lorenzo Ruiz at 3:58 PM No comments:

Putting things in perspective: Those involved in the Mamasapano

Those being investigated for their culpability with the deaths of the 44 Special Action Force Commandos are the National Police and the Armed Forces of the Philippines.  In case you are asking, the AFP reports to the Defense Secretary.

Then, do you expect something will come out of this?

Posted by Pedro Lorenzo Ruiz at 3:11 PM No comments:

Cebu, what has happened to you? 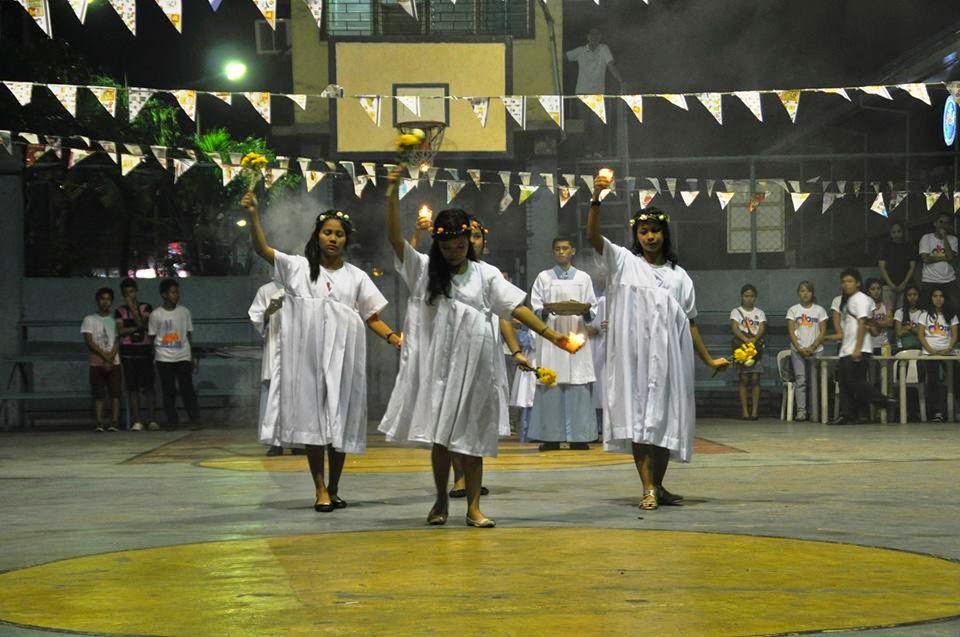 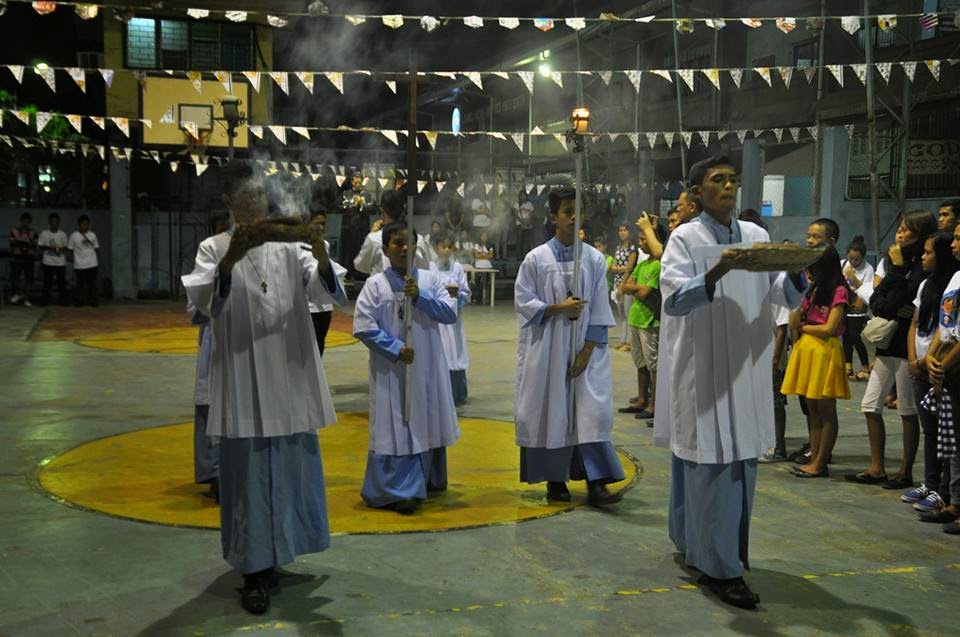 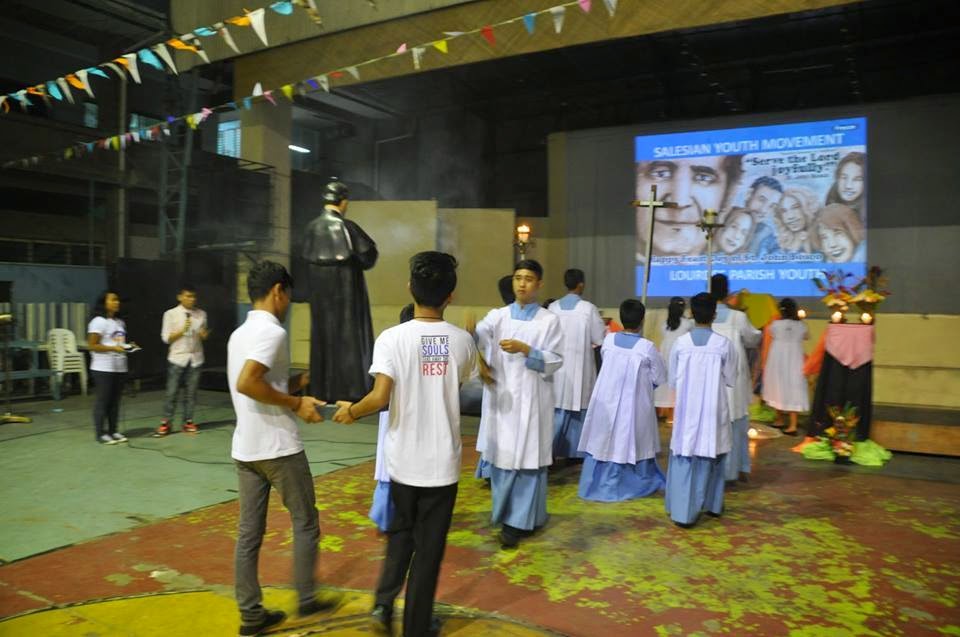 Email ThisBlogThis!Share to TwitterShare to FacebookShare to Pinterest
Labels: Archdiocese of Cebu, From a TPC reader, GULP Alert

Romero Beatification: It was Benedict XVI, not Francis

The cause of Archbishop Oscar Romero took a rather interesting twist.  Not the cause itself, but who really worked to fast-track the cause of the murdered Salvadoran archbishop.

"Archbishop Vincenzo Paglia, president of the Pontifical Council for the Family and the official promoter of the Cause of the Archbishop Romero of San Salvador, made the announcement in a homily on 20 April, just a few hours after a meeting with Pope Francis.


The monsignor who spearheaded the saint-making process for El Salvador's slain Archbishop Oscar Romero said Wednesday it was Pope Benedict XVI — and not Pope Francis — who removed the final hurdle in the tortured, 35-year process.

Archbishop Vincenzo Paglia told reporters Benedict "gave the green light." Speaking a day after Francis declared that Romero died as a martyr for the faith, Paglia said Romero's beatification would likely be within a few months in San Salvador.


Better we clear this up or we'll have the rabid media ganging up on the pope emeritus again.

Wasn't he described as God's rottweiler?

Posted by Pedro Lorenzo Ruiz at 11:55 AM No comments:

Crimes in the Vatican rising! Mainstream media bias, as usual.

Pray hard for the Eternal City.  Satan is not resting.

Taken from this site.

The Vatican’s chief prosecutor says the city state is experiencing a rise in crime, including drug trafficking, child pornography and money laundering. [Uh-oh...]


Gian Piero Miliano made the remarks while presenting a report on criminal activity and judicial work in the Vatican City last year.

Miliano said authorities were taking action against pedophilia with two cases of possession of child pornographic material being investigated in the Vatican City, which is a sovereign state within the Italian capital of Rome and holds a population of 842 people.

The prosecutor did not identify those accused in the cases; however, the Holy See spokesman Federico Lombardi named disgraced former Ambassador Josef Wesolowski as one of the accused.  [He has been laicized.  See here.]

Wesolowski is currently awaiting trial at the Vatican in what will be the first sex abuse trial ever held at the Holy See.  [Ingat ingat kayong nandiyan sa diocese of......(north of Manila)]

Miliano said the Vatican City is also fighting money laundering, including five alleged cases reported to the court by the Financial Intelligence Authority.

The Roman Catholic Church has been hit by numerous scandals in the past few years, involving allegations of covering up the sexual abuse of children by priests to protect pedophiles and the reputation of the Church.

More than 4,000 priests in the United States have reportedly faced sexual abuse allegations since the 1950s in cases involving more than 10,000 children.

Pope Francis, who was appointed [what?!  not elected?!] in 2013 with a mandate to overhaul the Vatican, has warned that there will be “no privileges” for bishops when it comes to child sex offenses. The pontiff also promised more action in response to accusations of cover-up and excessive leniency by the Vatican.

The reforms set in motion by Benedict XVI are being continued by Francis.

The Church is continuously under attack and Satan sets his evil gaze upon the shepherds of God's flock.

But also remember this: the Church is not the only one beset by child abuse and money laundering cases.  The US Public School System is the biggest single institution in the US to have this problem.  See here and here.  In fact, other religions have similar problems but are not reported by the media.

And here is graphic from the Associated Press that the mainstream media would NEVER ever report. 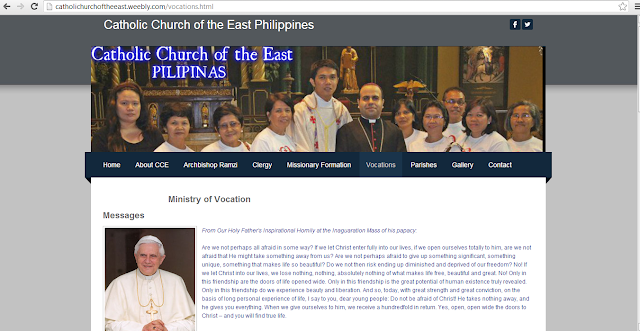 As it turns out, his adventures are now getting on to him.

Read about it here.

"I would like to clarify that I am NOT a fake priest. I have legal and ecclesiastical documents to prove. That my present bishop is NOT Ramzi Musallam, but Bishop Shimmun-Artemus Bar Kepha under Archbishop Levi Bar Kepha of the Ancient Apostolic and Catholic Church of the East," [the who???] "Bunag said on his post also denying that he concelebrated mass at the installation of Archbishop Lavarias.

If you want to Google those "bishop's" names.  Go ahead.  I'm warning you.

You have a better chance of winning the lottery than proving that these men are actually priests of the Roman Catholic Church.

Good luck or should I say....May you have all the patience you need to Google these names.


PS:  You might want to read this.
Posted by Pedro Lorenzo Ruiz at 11:13 AM No comments:

What is this I am reading that there are people who had boxes of candles blessed yesterday at Candlemas only to sell it online?!

Email ThisBlogThis!Share to TwitterShare to FacebookShare to Pinterest
Labels: Simony

BREAKING NEWS: The Congregation for the Causes of Saints has announced that Pope Francis has recognized the martyrdom of the Servant of God, Archbishop Oscar Romero.
Posted by Pedro Lorenzo Ruiz at 10:04 PM No comments: