I have always blogged against the Misa ng Sambayanang Pilipino (MSP) and have often said that this is an illicit form of the Mass, a Mass that is not even envisioned by the Council, but a Mass that Filipino bishops and liberal theologians and liturgists have tried to shove down our throats, demanding that we shut up and just obey.  What a way to demand obedience when they themselves have openly defied the Church for making us worship with a manner not recognized by the Holy See, with a manner not Catholic.

Catholics all around the world worship using one form of the Mass before Summorum Pontificum was released, making the Traditional Latin Mass available to those who are attached to it.  And so the Holy Father, Pope emeritus Benedict XVI, defined that there is still one Mass, with two forms, or expressions, the Ordinary Form, or the Missal of Paul VI, and the Extraordinary Form, which is the Missal of Blessed John XXIII.

But Filipino bishops and those tied to the leash of the liturgist the late Dom Anscar Chupungco, osb, and his minions, have continuously forced us to worship in a manner foreign to us, the MSP.

As you will read in the introduction in the Missal for the PCNE's MSP, all evidence points that this Mass did not get the approval of proper authorities.

So supporters would ask "Why would we even ask Imperial Rome for approval? We pray according to the promptings of the Holy Spirit!"

"Oh really?  Promptings?  That is why we need to have guides for the Mass?  Why Rome?  So who do we need to obey?  YOU?  Puhleaze!"

Scholars at the Maryhill School of Theology [the heretical theology school and they are proud of it] took the first steps towards an inculturated Eucharistic celebration called Misa ng Bayang Pilipino. [Did you see any document of Vatican II calling for an inculturated Mass?  No.  And you won't be surprised by the actions of Fr. Chupungco and his minions why they hate the Traditional Latin Mass or a more reverent celebration, e.g. Ad orientem, of the Novus Ordo.  Why you'd ask?  Because the MSP's utter foolishness and heretical form would fall flat on its face for it's sheer stupidity! If my theories were not true, why do they keep banning the TLM in Manila even though the motu propio Summorum Pontificum is still in force?]

The project was undertaken under the direction of Fr. Anscar Chupungco, OSB. This Filipino adaptation of the rites and texts of the Roman Order of the Mass was presented for approval to the Sacred Congregation for Divine Worship and the Discipline of the Sacraments on August 10, 1976.  [And since then...nada!  The Congregation did not give any approval.  As you will notice, the booklet will not even mention when the permit was given.  Nada!  Nothing!]

The Bishops of the Philippines gave their unanimous consent during their June 1976 meeting.  They began to “research on Filipino values and cultural expressions and on the possibility of incorporating into the Roman Mass those elements which could be pastorally useful and necessary.”  [ Pastorally useful???  You made the Mass like your own jigsaw puzzle??  People are scandalized and you call it pastorally useful??  And still no approval from Rome!]

Through dynamic equivalence, [ah!  the favorite terms of Fr. Chupungco!  What was used in the new Missal was formal equivalence as opposed to dynamic equivalence (DE).  We had DE in the old translation of the Missal that is why we had problems with it.  So, the Holy See decreed that it be changed and that formal equivalence be used in the translation.  So what do you expect?  DE champ Chupungco got all mad!  Duh.] the spiritual and doctrinal wealth of the Roman Order of the Mass are communicated to the Filipino Catholic faithful with the use of language, gestures and symbols culled from the Filipino pattern of thought, speech and behavior....[the wealth of the Roman Order of the Mass?  How can you even speak of Roman when the Mass is anything but Roman?  No wealth to communicate whatsoever!!!]

On December 7, 1979, the Misa ng Bayang Pilipino was celebrated for the first time by Cardinal Sin on the occasion of the International Mission Congress held in Manila.  [They still cannot give a date for the approval, just like Communion in the Hand.  No approval for the Philippines.  Nothing!]

As you will read in some of the comments in this post and this post, many are SCANDALIZED.

I guess not even the scandal that this "mass" created can even make Cardinal Tagle cry, even though how easily he cries as he admitted.

Happy days are back again in Manila.

Kumbaya!  Strum the guitar, and beat the drums!

We are more Protestant than we are more Catholic!

When we lose our sense of identity as Catholics, when we become too mushy and too accommodating, when we think more like Protestants than Catholics, what do you expect we'll become?

And what a perfect way to cause scandal and make people lose their faiths, no?  At a conference named "Philippine Conference on the New Evangelization".

Those in UST, I am very sorry for you.  I am sure the PR gangs of Katipunan and the minions surrounding the cardinal all bullied you into obedience for this horrendous way of saying the Mass.

Let's do an open rebellion of ourselves... 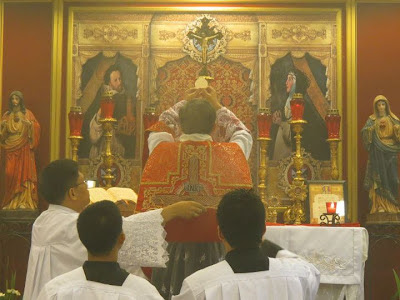 Or the next time you know that the MSP will be celebrated.  Attend!

Then when the entrance procession starts, leave!

The "Mass" has not started and you are not sinning.  If you even participate in this kind of "mass", you'd be sinning more.

Of course, you'd be disappointed by this post!  You'll lose your position of authority, fame and fortune if we do away with the MSP!

Fr. Chupungco did a lot of harm for the Church.  He did.  Pray for him.

Posted by Pedro Lorenzo Ruiz at 9:40 AM