Anomalies in the Novus Ordo?

There are other anomalies [wow!  what a term!] within the Novo [Novus] Ordo that I think are worth mentioning:

2. Holding of Hands during the Pater Noster. Should it not be the priest raising his hands as a gesture of raising the prayers of the congregation to God?  [Well...this is the subject of my next blog post.]

4. Saying "My Lord and My God" during consecration.  [This is actually a pious devotion that was done even before Vatican II and is still encouraged   You can read about this in a post by Fr. Z. In fact, St. Pius X granted an indulgence to those who would say those words while the Host is elevated.  In fact, the traditional ejaculation is this:  “My LORD and my God, I believe, help my unbelief.” and at the elevation of the Chalice, “Be mindful O LORD of Thy creature, whom Thou hast redeemed by Thy most Precious Blood.” ]

5. Recitation of the shorter's Apostles Creed instead of the longer Niceno-Constantinopolitan "Credo in Unum Deum". I don't see any pastoral reason the recite the shorter version. By the way, it is ONLY in the Philippines that the Apostles Creed is recited in the Mass. WHY?  [It was decided upon by the CBCP.  But with the new translation, the Nicene Creed is now recited during Masses in English.]

6. The secular greeting at the start of the Mass e.g. good morning, good evening, etc... This is totally NONE liturgical and is a pretty good means of flushing out in a second the prayerful atmoshere that has built during the entrance hymn or antiphone.  [I am with you on this.  "The Lord be with you." is the best greeting you could ever say to another Christian.]

7.Clapping after the Ite Missa Est as norm. I do not see this in the rubrics, do you? [I have blogged a lot of time against this.  THIS IS JUST A PLAIN DUMB PRACTICE!]

8. The terrible pop music we implement in our liturgy that are no longer reverend of the Church, no longer didactic, not singable or cantabile by the common man and as a congregation. E.g. "Humayo't Ihayag" is a catchy tune, but is it singable? does it teach much? In addition, the usage of secular instruments which distracts more than uplift. We really lost the use of the classical organ where the right hand plays a different part from the left, melodiously assisting the Gregorian Chant. Not so much of Nostalgia because I have not experience this era.  [Vatican II placed Gregorian Chant in a a very high place, YET, liturgists like Chupungco and Diwa have a very low regard for Gregorian Chant.  You ask why?  Ask the Jesuits of Ateneo in Katipunan Ave.  They created a big industry out of this.  Imagine if they promoted Gregorian Chant.  You think they'd benefit financially from it?]

9. Removal of the Crucifix on the Altar because this removes the sense of sacrifice of Christ that the priests re-offers in a mystical manner. If I were the Pope, I would order priests to perform the Consecration AGAIN facing the altar and back against the congregation because this is the greatest symbol that the priest is offering the Merits of Christs Passion, Death, and Resurrection in a mystical and unbloody manner to the Father FOR THE PEOPLE and In Persona Christi. Then he can face back the congregation when he resume praying the rest of the Eucharistic prayer.  [One of the great and mind-boggling reform that the Church did after Vatican II is to have Mass facing the people.  I suggest you read this.]

10. The blessing for anniversary, birthday celebrators at the end of the Mass and the singing of the HAPPY BIRTHDAY inside the Church. Ahhh, this really is appalling.  [I am with you here.  There is a special liturgy where special blessings can be done.]

10. Engaging altar girls. As I said, this is a practicum for boys, not for girls. [I have blogged about this.  I don't like it either.]

11. Priest not wearing the alb underneath. Even if we're in a tropical country, it is not reason to wear the Chasuble as this is a symbol of the Baptismal robe.  [There are a lot of liturgical abuses committed by priests who do not wear the proper liturgical attire.]

12. On the laity's part, the already norm of wearing casual instead of the Sunday Best clothes. [It's not the norm.  In fairness, the Archdiocese of Manila came out with guidelines about this.  Unfortunately, they are good on paper.] Wow! We all go dress to the 9th when attending parties, social gatherings, weddings, SONA, yet in the house of God, we enter with our pekpek shorts and chinelas and maong pants. So is God a lesser person to honor?

Ahh, just too much abuse that simple makes me squirm. No wonder present day Catholics lost their respect for the priesthood, for the sanctuary, for the Holy Eucharist, the lost of reverence and appreciation for the Mass, all because the way we celebrate the Lex Orandi DOES NOT anymore Reflect our Lex Credendi, i.e. our Liturgy in the Novo Ordo or the manner we celebrate it no longer express and is didactic showcase of our What We Believe.

Whenever we see priests treat the Mass as if it were their own entertainment show.

We treat the Mass as if it were not a holy event.

Even Commencement Exercises are treated with so much pomp and nobility, the present day Sunday Mass becomes much like a children's party!

Is this how we treat the holy?

Both clergy and laity are guilty. 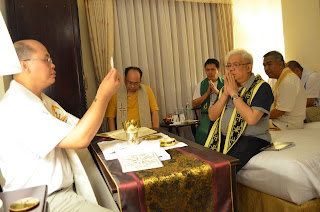 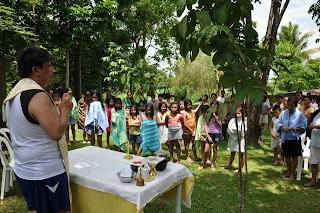