Today is the memorial of St. Luke the Evangelist.

The photo you see below is the reliquary containing the relics of the saint. 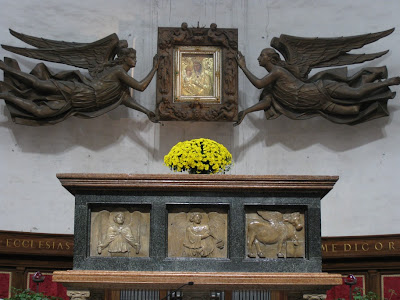 No other than Hell's Bible, aka the New York Times, published the report confirming the remains as those of an individual of Syrian descent who died between 130 and 400 A.D. Nay sayers?

Sorry Father Anscar for ruining your "relic bashing" down and other medieval-relic- commerce-story-tellers out there but the reliquary contains the relics of the saint and not some medieval forgery.

I have quoted the entire article here so you won't have to go to Hell's Bible's website:

A new DNA analysis gives tentative support to the belief that the remains in an ancient lead coffin are those of St. Luke, traditionally considered the author of the third Gospel and the Acts of the Apostles.

Dr. Guido Barbujani, a population geneticist at the University of Ferrara, Italy, has extracted DNA from a tooth in the coffin. He concluded that the DNA was characteristic of people living near the region of Antioch, on the eastern Mediterranean, where Luke is said to have been born. Radiocarbon dating of the tooth indicates that it belonged to someone who died between 72 A.D. and 416 A.D.

A report by Dr. Barbujani and colleagues appears today in the Proceedings of the National Academy of Sciences of the United States.

The Evangelist, according to ancient sources, was a physician who was born in Antioch and died at 84 in about 150 A.D. in the Greek city of Thebes. The coffin with his remains was taken to Constantinople, the capitol of the Byzantine empire, in 338 A.D. and later moved to Padua, Italy.

Dr. Barbujani and his colleagues speculate that the coffin may have been sent out of Constantinople for safekeeping, either during the reign of the Emperor Julian, who tried to restore paganism, or during the iconoclast period of the eighth century, when many religious images and objects were destroyed.

The coffin is known to have been in Padua at least since 1177 A.D. It was placed in a marble sarcophagus and kept in the Basilica of Santa Giustina. It was last opened in 1562 A.D. and seems to have been somewhat ignored until October 1992. At that time the bishop of Padua, Antonio Mattiazzo, received a letter from Hieronymos, the Orthodox Metropolitan of Thebes, asking that part of the relics to be donated to the site of Luke's tomb in Thebes.

Bishop Mattiazzo, according to an article in November 2000 in Traces, a Catholic journal, decided to investigate the relics under the leadership of Dr. Vito Terribile Viel Marin, a pathologist at the University of Padua. In 1998 the 400-year-old seals were removed from the lead coffin, and the study began.

The dimensions of the coffin exactly fit the tomb in Thebes considered to be Luke's. In the coffin was a skeleton, but not the skull.

Dr. Barbujani and his colleagues say the body appears to have decomposed in the coffin because of matching insect marks on the lead and the pelvis, which has fused to the lead.

The spread in the radiocarbon dating indicates at least two possibilities. One is that the body is that of Luke or a man who died at the same time, the other is that for some reason, a new body was put in the coffin in Constantinople around 300 A.D.

To help distinguish between the two, Dr. Barbujani, an expert on the genetics of European populations, analyzed fragments of DNA from the tooth, a canine, found on the floor of the coffin, and sought to compare them with likely living representatives of the ancient populations of Antioch and of Constantinople. An Antioch match would suggest the body could be Luke's.

Since the present population of Antioch includes many Kurds, Dr. Barbujani sampled the DNA of Syrians from nearby Aleppo. In place of the inhabitants of ancient Constantinople, now Istanbul, he tested Greeks from Attica and Crete.

The DNA from the Padua tooth, a type inherited only through the mother's line, turned out to resemble Syrian DNA more than Greek DNA.

''Our data tell us the body is absolutely compatible with a Syrian origin,'' he said. ''But I am aware of the limitations of the DNA data, and though a broad spectrum of ages is possible, the most likely is 300 A.D.'' Hence both possibilities should remain open, he said.

The body, if indeed it is Luke's, has experienced a simpler voyage through history than the head, which was removed by the Emperor Charles IV in 1354 and taken from Padua to Prague, where it rests in the Cathedral of St. Vitus, in the Prague Castle.

''There were officially two heads of St. Luke, one at Prague and one in Rome,'' Dr. Barbujani said. At Bishop Mattiazzo's request, the Prague skull was brought to Padua and found to fit perfectly to the topmost neck bone. The tooth, found on the floor of the coffin, also fit into the right socket in the jawbone.

Though many relics turn out to be forgeries, executed in modern or medieval times as demand arose, the Padua body seems more likely than most to be what it is claimed to be, although exact proof is lacking.

''I think we should accept that there is no way to tell if it was the Evangelist Luke, but the genetic evidence does not contradict the idea,'' Dr. Barbujani said.

Last October, according to the Traces article, at least part of the body completed the circle to its original resting place. Bishop Mattiazzo sent a rib from the skeleton for Metropolitan Hieronymus to place in the empty Theban tomb.

UPDATE!!!
Fr. Jojo Zerrudo, our very own Fr. Z, has posted a very nice quotation about the Veneration of Relics of Saints, in response to the Rorate post about Master Inculturator, Fr. Anscar Chupungco's seeming mockery of the veneration of saints' relics.

Go visit his wonderful blog aptly title Sense of the Sacred for the quotation from the Council of Trent, which Fr. Jojo masterfully used as a response to the mockery.  Speaking of the Council of Trent, I think most Bugnini liturgists hate to even mention the name Trent.  Sends shivers down their spines.  Like holy water on the skin of the possessed.

Email ThisBlogThis!Share to TwitterShare to FacebookShare to Pinterest
Labels: chupungco, Saint of the Day