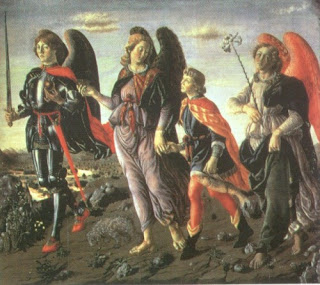 I am a devotee of St. Michael the Archangel and I love to say the Leonine Prayer to St. Michael after every Mass, OF or EF.

So in honor of the beloved Prince of the Heavenly Hosts, even though today is the feast of the three biblical archangels, I present this wonderful article courtesy of Fisheaters.com.

There are seven Archangels in all, but only the three mentioned in Sacred Scripture are commemorated liturgically; St. Gabriel's Feast is on 24 March, and St. Raphael's Feast is on 24 October (the Guardian Angels are remembered on 2 October. The other archangels, whom we know from the Book of Enoch, are Uriel, Raguel, Sariel, and Jeramiel.) Today, though, we honor St. Michael the Archangel, whose very name in Hebrew means, "Who is Like God." St. Michael is described in the Golden Legend, written in A.D. 1275 by Jacobus de Voragine, Archbishop of Genoa, thus:
For like as Daniel witnesseth, he shall arise and address in the time of Antichrist against him, and shall stand as a defender and keeper for them that be chosen. [Daniel 10:13, 12]

He also fought with the dragon and his angels, and casting them out of heaven, had a great victory. [Apocalypse 12:7-9]

He also had a great plea and altercation with the devil for the body of Moses, because he would not show it; for the children of Israel should have adored and worshipped it. [Jude 1]

He received the souls of saints and brought them into the paradise of exultation and joy.

And as it is said, he made the plagues of Egypt, he departed and divided the Red Sea, he led the people of Israel by the desert and set them in the land of promission, he is had among the company of holy angels as bannerer. And bearing the sign of our Lord, he shall slay by the commandment of God, right puissantly, Antichrist that shall be in the Mount of Olivet. And dead men shall arise at the voice of this same archangel. And he shall show at the day of judgment the Cross, the spear, the nails and the crown of thorns of Jesu Christ.

Expounding on St. Michael's final victory over the Antichrist, the Golden Legend continues:
The fourth victory is that the archangel Michael shall have of Antichrist when he shall slay him. Then Michael, the great prince, shall arise, as it is said Danielis xii.: “He shall arise for them that be chosen as a helper and a protector, and shall strongly stand against Antichrist.” And after, as the Gloss saith: “Antichrist shall feign him to be dead, and shall hide him three days,” and after, he shall appear saying that he is risen from death to life, and the devils shall bear him by art magic, and shall mount up into the air, and all the people shall marvel and worship him. And at the last he shall mount up on the Mount of Olivet, and when he shall be in a pavilion, in his siege [seat], entered into that place where our Lord ascended, Michael shall come and shall slay him. Of which victory is understood, after St. Gregory, that which is said in the Apocalypse. The battle is made in heaven.

St. Michael is our warrior against the Evil One, and is the one we call on in times of temptation, especially with our Prayer to St. Michael:

St. Michael the Archangel, defend us in battle; be our safeguard against the wickedness and snares of the Devil. May God rebuke him, we humbly pray, and do Thou, O Prince of the Heavenly Host, by the power of God, cast into Hell, Satan and all the other evil spirits, who wander throughout the world, seeking the ruin of souls. Amen.

This great champion of Israel has made many important appearances throughout the years. In A.D. 590, during the reign of Pope Gregory, a great pestilence swept through Rome. During a procession and litanies led by the Holy Father there, St. Michael appeared over the Castel Sant'Angelo -- a building which was formerly Hadrian's tomb, but which was converted to papal use, connected to the Vatican by a long tunnel. A statue of St. Michael sits atop the building today (picture at top right).

Mont St. Michel was built to St. Michael's honor off the coast of Normandy, France. Our warrior Saint is said to have appeared there in 708 to St. Aubert, Bishop of Avranches (picture at bottom right).

He also, along with SS. Margaret and Catherine, appeared to St. Joan of Arc (d. 1431) when she was thirteen years old, encouraging her to assist Charles VII in defeating the English. She later told her judges, "I saw them with these very eyes, as well as I see you."

St. Michael is patron of knights, policemen, soldiers, paramedics, ambulance drivers, etc., and also danger at sea, for the sick, and of a holy death. He is usually depicted in art carrying a sword and/or shield, battling Satan.
Posted by AAA at 5:03 PM

Email ThisBlogThis!Share to TwitterShare to FacebookShare to Pinterest
Labels: prayer, Saint of the Day