To hell with a uniform! Let us just love one another

Well, he did not actually say that but that is what he is implying.

An online debate revealed a nasty philosophy of one supposed Catholic defender when he defended a priest wearing a stole over his secular clothes for Mass.

He said that what matters the most is what is in the heart...

Were we even talking about what is in the inside???

Should we even debate upon how important it is for a person, priest or not, to have a clean heart?

We were talking about wearing the proper vestment for the right occasion....PROPERLY.

Or maybe he thinks the priest here is TOO KIND or his heart is overflowing with LOVE that he doesn't need to dress up well for the event, no? 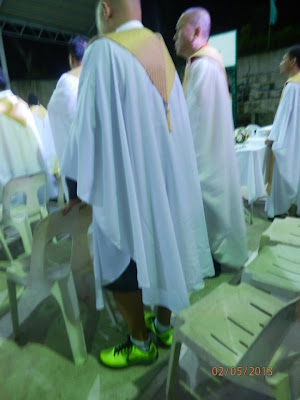 And then he went to berate so called "legalistic" and "extreme" views of some Catholics who don't know how to LOVE.

Are we still in the age of Aquarius?  That dang zombie is still alive even after I fired numerous peas on that damn thing.

You got o a job interview and you are expected to dress up properly.  Will the Recruitment Officer tell you "Let me see what is in your brain and in your heart.  Doesn't matter you came here to work in an international development agency wearing your G-string proudly!"

You go to a graduation ceremony and you are expected to wear the approved graduation garb...

You go to a wedding and you are expected to dress up according to the DRESS CODE.

And this so-called Catholic Defender, believes that you don't have to dress up appropriately during the event that makes present the actual Sacrifice of Calvary.

Christ was a faithful Jew.  He did not attack the liturgical garbs of the High Priests of the Temple?  He attacked the Pharisees who wore the long non-liturgical garbs just to draw attention to their holiness while their attitudes speak volumes against it.

No.  Christ was calling to the INCONGRUENCE of the internal reality of the Pharisees heart and soul and their external reality as evidenced by their garbs and attitudes.

Christ was not against the garbs per se.  He was a faithful Jew and he wore what most Jews at that time wore.  He did not even question the liturgical laws that the High Priests of the Temple were following based on the laws of Moses written in Leviticus.

So for that Catholic Defender who thinks it is all about Love...no point debating about it.

Just makes me wonder if these priests you are actually defending really understand who and what they love.

Like a married man who walks around flirting with women while he conveniently tucks his wedding ring inside his pocket...

The Defender's first name is the same for the name of a politician of a city in Metro Manila, a on and off actor, whose screen name tastes like beef with soy sauce and onion rings!  And his last name is the first name of a former sexy actress whose infamous film sounds like she wants to taste a pineapple!