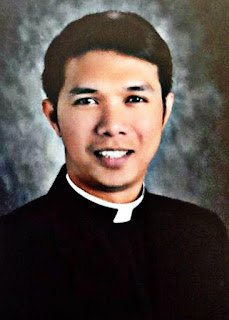 Teletubbie is back!  No not him, though they almost act the same.  Acting as if they are indeed clerics.

That one up there is a schismatic fake priest, Mark Robinson Bunag

HE was the one who proudly posed inside a confessional, wore a stole, and lifted his hand as if he were giving an absolution to someone from the other side of the confessional.

And now he is has a new photo of him wearing a black cassock and Roman collar while giving a talk...

Subject:  "Do I look like a cleric with this collar on?  Now, when can I enjoy my privileges?"

Kids.  Garments especially used for specific purposes are not an RTW type of cloth.  You have to work hard to earn the right to wear them.

You can't wear an academic garb in a graduation ceremony if you are not graduating or do not hold the specific degree the toga and hood stands for.

You cannot wear a military uniform if you are not part of the military.

You cannot wear a clerical garb if YOU ARE NOT A CLERIC!

You have to work hard, count even years before you can earn it!  It is not something you buy off the shelves of SM and just put it on.

YOU HAVE TO EARN IT, BROTHA!

Guess CosPlay is creeping into the Traditional circles isn't it?

We devote so much of our time criticizing the liturgical nonsense of the garbs of those who serve at Novus Ordo Masses and their liturgical abuses, those in the Traditional movement must also start policing their ranks!

Teletubbie has been walking around brandishing his collar as if he were either a seminarian or a cleric.  One asked him in the same Facebook post "pre .seminarista ka ba?".  And then there was dead silence!

Stop this nonsense in the Traditional movement please?

It is not helping our cause one bit.

Stop giving the movement a bad reputation, ok?  The Traditional movement is not just about the vestments and the rituals.

Now take that off Teletubbie!


PS:  Thanks to a TPC reader for sending me the screencap.  I'm pretty sure if I posted Teletubbie's photo again, he'll be screaming death threats at me at his Facebook wall.  Yup, thanks to his "friends" who are concerned with his lunacy, I get to see what he posts.

Posted by Pedro Lorenzo Ruiz at 8:16 AM