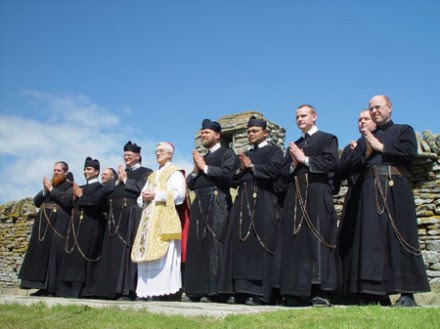 (Catholic Herald) A traditionalist group based on an island in Scotland has been formally established as an institute within the Catholic Church.

The Congregation of the Sons of the Most Holy Redeemer, also known as the Transalpine Redemptorists, was erected today, on the feast of the Assumption, as a Clerical Institute of Diocesan Right.

The community, which has about 15 members, has been in limbo since 2008 when it announced that it wished to enter into full communion with Rome.

Previously, the community had been a part of the worldwide Society of St Pius X (SSPX), the estranged traditionalist group currently in dialogue with Rome.

This evening the community were to make a public profession of vows at their home on Papa Stronsay, a tiny, windswept island in Orkney, off the north-east of Scotland. The profession will be celebrated by Bishop Hugh Gilbert OSB of Aberdeen, who, as their diocesan bishop, granted them canonical recognition.
Bishop Gilbert was ordained as Bishop of Aberdeen exactly a year ago, taking over from Bishop Peter Moran, who had retired.
Posted by AAA at 7:27 PM