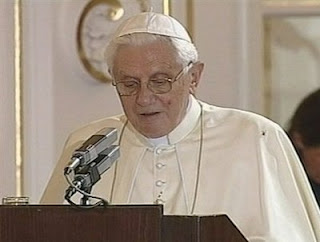 A large arachnid appeared on the pope's white robes as he addressed politicians and diplomats in Prague on Saturday afternoon. The pope didn't seem to notice at first — but journalists following the speech on a large screen flinched as the spider inched toward Benedict's neck.

It disappeared from view for a moment, but then could be seen crawling up the right side of the 82-year-old pontiff's face.

When it reached his ear, Benedict gave it a swat. But it didn't go away — it reappeared on the pope's left shoulder and scampered down his robe.

As the pope left the medieval Prague Castle's ornate Spanish Hall, the spider could be seen hanging from a piece of web.

In June, Obama now famously swatted and killed a fly that intruded on an interview for CNBC at the White House.

***
Guess the Western media will not go "gaga" over this one like how Obama swatted a fly!
Posted by AAA at 2:50 PM