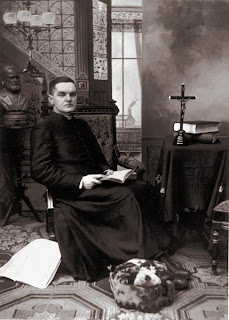 HARTFORD, Connecticut, SEPT. 24, 2009 (Zenit.org).- The founder of the Knights of Columbus, Father Michael McGivney, might be closer to recognition as a saint, as an expanded report on a possible miracle has been sent to Rome.

The Knights of Columbus announced in a press release today that on Tuesday, officials of a supplemental tribunal from the Hartford Archdiocese, where Father McGivney served as a parish priest, formally sent the report to the Congregation for Saints' Causes.

Carl Anderson, the supreme knight, as well as a regular ZENIT columnist, explained that this submission "marks an important step forward."

He explained: "The Vatican's congregation for the causes of saints will now have valuable additional testimony that clarifies and adds significantly to the original submission.

"We believe that the congregation will now have all the information it needs to complete its assessment of the case, although of course this review could take several years."

The new report includes additional testimonies and interviews from witnesses and medical doctors who supported the original description of the reported miracle.

Father McGivney founded the knights in 1882, and died in 1890 at age 38. The cause for his sainthood was opened by Archbishop Daniel Cronin of Hartford in 1997. In March 2008, Benedict XVI declared him venerable.

"Father McGivney's beatification would be an important event," Anderson said, "not only for Knights of Columbus, but for the many thousands of parish priests who quietly do the Lord's work in parishes each day and regard him as an outstanding example for priests everywhere."

The supreme knight added, "In this Year for Priests it is an especially appropriate step forward."

Email ThisBlogThis!Share to TwitterShare to FacebookShare to Pinterest
Labels: Knights of Columbus