All About the Pallium

Today, the Feast of Sts. Peter and Paul, the Holy Father, Benedict XVI bestowed pallia (plural of pallium) upon the newly appointed or assigned metropolitan archbishops around the world.  They are called upon to the Eternal City to receive the pallium from the hands of the pope himself to signify their unity with the Successor of St. Peter.

I was reading the interesting exchanges in the combox of Fr. Z's What Does The Prayer Really Say?  and I found an interesting discussion about the pallium.

Some of the readers commented that the pallium worn by our present pope in the mural at the Major Basilica of St. Paul's Outside the Walls.  These are the photos of the murals. 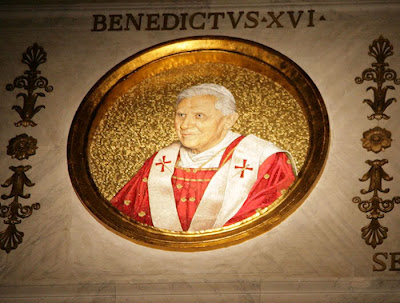 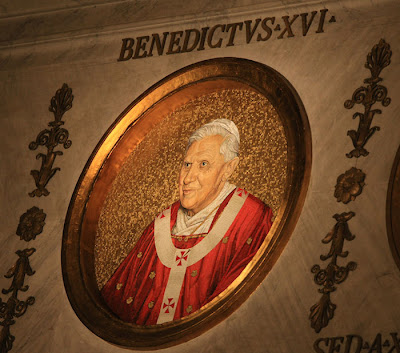 I personally don't like the first pallium used by the pope which was given to him during his Installation Mass.  There are more than a nunber of times the large pallium would fall off the pope's shoulders that the it needs to be placed properly again on his shoulders.  Further, the huge pallium will be too cumbersome if he uses it on a Roman chasuble.

Critics say that Abp. Piero Marini, the former papal Master of Ceremonies, "invented" the 1st pallium that Papa Benny used.  Well, Piero Marini, being a protege of Annibale Bugnini, is known to invent things in the liturgy as we can see in the photo below. 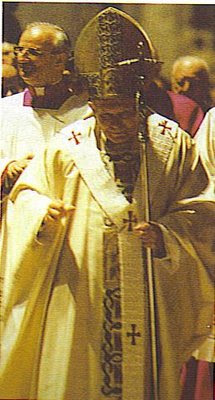 Yup!  That IS a pallium used by JP2 and not another version of an overlay stole.  As quickly as it was used, quickly did it disappear. That pallium is not used ever since.  Goodbye to Piero Marini's "archaelogistic liturgical innovations", if there is such a term.

Below is a photo of JP2 using the pallium similar to archbishops use today, but with the papal fanon, the gold striped linen, almost similar in shape to a mozzetta, where the pallium is resting. 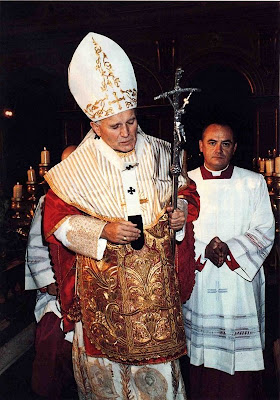 As you can see the pope was in full papal regalia.  Well, not full exactly.  The tiara is not there.  I  miss the papal fanon.  The photo shows probably the only time Papa Lolek used the papal fanon and the other vestments like the dalmatic and tunicle.  Hard to say if he is wearing the maniple in this photo.  I believe he said Mass at Sta. Cecilia.  LITURGICAL EYE CANDY!

Some have suggested that the pope use the same pallium as the one he bestows upon the metropolitan archbishops every Feast of Sts. Peter and Paul and use the fanon to distinguish him as bearer of an office higher that the metropolitans and to convey the message that the archbishops are indeed united with him.  Some say that he continue using the present one and add the fanon.

Personally, I prefer the one Pope Benedict XVI uses.  And I would love to see him use the papal fanon and be clothed the same as Pope John Paul II above.

What do you think?  Which pallium do you prefer?  Do you want to see the fanon back?

By the way, other bloggers want to see the tiara back on the pope's head too.  I like to see it too.

The interview with Msgr. Guido Marini, the present Papal MC, regarding the design of the new pallium can be accessed here