I can't help my trained eye to notice what the pope emeritus was wearing during the Canonization Mass.

You have to click the image for a larger view.

As most of us knew now, the pope emeritus is not wearing the Piscatorial Ring anymore, of course, since he is not the reigning pope.

As you can see, he is wearing a different ring.

Here is a close-up of his ring. 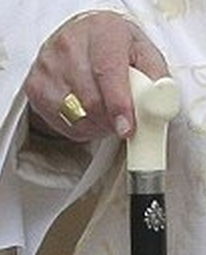 And you can see his papal coat of arms on the cane.  No, he is not pope anymore so stop that conspiracy theory.

And here is another image of the pope emeritus and his ring.

And here is the close up of that ring.

It is called the Conciliar Ring or the Episcopal Ring of the Council Fathers or more famously known as Vatican II Ring.

Here is another view of the ring.  You can see that this is an open type so it is perfect for anyone with varying ring sizes considering that these rings were made without asking the Council Fathers their ring sizes.

This was given to all the Council Fathers after the closing session of the Council by Pope Paul VI.
(Sedevacantists:  Cue video clip of Sauron giving the rings of power to elves, dwarves and men!)

I personally saw this on one archbishop who was a Council Father.  I kissed it and he let me take a good look at it.

Considering the number of Council Father, I think the material is rather cheap and this is easily done.  The back of this ring open so it can fit any ring size.

Father Ratzinger was a peritus (expert) for Joseph Cardinal Frings of Cologne.  He certainly was not a Council Father so he definitely did not receive this ring.

This might be from Cardinal Frings or from another bishop.

So, for the liberals, Benedict XVI was a traitor of the Council.  See the ring?

For the traditionalists, he is an apostle of the Council.  Summorum Pontificum?  SSPX reunification efforts?

As far as I can still remember the Pope emeritus is the pope of Christian Unity and of the hermeneutic of continuity.

And even if you produce 1 million Anscar Chupungco's or 1 billion Genaro Diwa, it would still not suffice for one Joseph Ratzinger in terms of sound theology and liturgy.

If there is one humble man the whole world is missing with all the hoopla about the simplicity of Pope Francis, it is Benedict XVI.

Only a humble man can admit that he is done enough and it is time to step down.

Posted by Pedro Lorenzo Ruiz at 11:53 AM