When you don't treat the church as a sacred place...

And when you think you just can do whatever you want, whenever you want it, just to get attention

That is what this joker did. 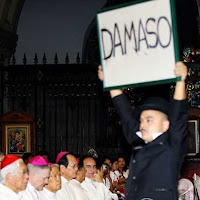 And that is the concept of a Flash Mob.

As they say in publicity and PR circles..."Any publicity is GOOD publicity."

And that is what they only cared for.

MANILA – Months after surprising passengers at the Ninoy Aquino International Airport, members of the Cultural Center of the Philippines staged another flash mob performance, this time inside the iconic Baclaran Church.  [And for what?!]

Headed by the Philippine Madrigal Singers, more than 300 choir members sang and danced to Ryan Cayabyab’s “Hibang sa Awit” after the Wednesday noon mass inside the church.  [People were still praying....and they went HIBANG, which means MAD.  Boy, if I were there!]

CCP artistic director Chris Millado said the performance, which he referred to as a “random act of culture,” is aimed at making “art matter to every Filipino.”  [First of all, a flash mob is not random.  It is a planned publicity stunt.  Second, disrupting people while they are still praying is not a sign of someone "cultured".  Third, doing this cheap act in a sacred place is not for someone CULTURED!]

The flash mob also marked CCP’s 44th anniversary.  [They just showed people how to be cheap.  The leader of the Madz died and they went with this.  Just so you know how we missed her so much.]

“In the wake of yet another scandal that has ravaged the nation, artists once again persist in picking up the shreds of our dignity and sing with hopefulness that all Filipinos finally get the graceful lives they deserve,” Millado said in a statement, referring to the multi-billion peso pork barrel scam involving non-government organizations and lawmakers.  [This is neither graceful nor what we deserve.  The national shrine is not the place to do this stupid thing!  If you want to pick up the shreds of our dignity and sing with hopefulness, go to the Senate or to the House of Thieves in Batasan.  Go to the slum of Payatas and sing there!  Not in the CHURCH!  That damn write up just came from the books of "How to write a bad press statement for a BAD publicity stunt". ]

In October last year, members of the CCP and the Philippine Philharmonic Orchestra performed “William Tell Overture,” a “Sound of Music” medley, and “Kay Ganda ng Ating Musika” at the airport. [But why a church?!]

Would you think they'd do the same let's say in a court of law, or in the halls of parliament, or even in Malacanang?

Let's try doing it in their own homes, huh?

Of course, they'd get mad, the government officials and those who own their homes.

It's an invasion of privacy!  A SACRED thing for these people, but not the HOUSE OF GOD!

We have lost THE SENSE OF THE SACRED and that is why we just do whatever we want whenever we want it just to get the attention.

And this time, we had a Redemptorist priest to join them in this nonsense!

DO IT OUTSIDE THE CHURCH FOR CRYING OUT LOUD!!!

Email ThisBlogThis!Share to TwitterShare to FacebookShare to Pinterest
Labels: Pinoy Catholics, The Sense of the Sacred