A little known fact about the Titanic

Now they release it on 3D?  What new ending?

Part 2 if you ask the pirates at Quiapo and Greenhills.

What?!  The Titanic sunk again?!

Seriously.  I even saw DVDs at Quiapo being offered to me:  "The Passion of the Christ 2"

There is something most people don't know about the Titanic.

Yup, we all know how it sank, the aftermath, who most of the people are, but we don't know, as Catholics, this little known fact:

THERE WAS A CATHOLIC PRIEST ON BOARD TITANIC WHEN IT SANK...

AND HE DIED DOING WHAT A CATHOLIC PRIEST MUST DO:


COMFORT THE GRIEF STRICKEN AND ABSOLVE PEOPLE OF THEIR SINS.

An Apostle of the Divine Mercy on board!

Yup, the priest, according to witnesses, refused several offers to be in the lifeboats, instead helping women and children into the boats, while he stayed behind to do what he must do. 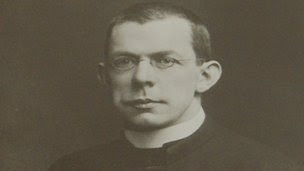 He is Rev. Fr. Thomas Byles. He was born on 26 February 1870. His birthname was Roussel Davids Byles, the eldest of seven children of a congregationalist minister. He studied theology at Oxford in 1889 and graduating with a Bachelor of Arts degree in 1894. It was at Oxford that he converted to the Catholic faith, taking the name Thomas at his baptism. In 1899, he went to the Beda College in Rome to study for the priesthood, and was ordained in 1902. He was assigned to St. Helen's Parish in Chipping Ongar, Essex in 1905.

His younger brother William, who also was received into the Catholic Church, invited him to officiate his wedding at New York which prompted big brother Father Byles to make the trip via the RMS Titanic. He said Mass on the morning of the sinking, Low Sunday, 14 April 1912, for both second- and third-Class passengers in their respective lounges. Ironically, his sermon was on the need for a spiritual lifebelt in the shape of prayer and the sacraments when in danger of spiritual shipwreck in times of temptation.

Reportedly, Father Byles was strolling on the upper deck reciting his Divine Office when the Titanic struck the iceberg. As the ship was sinking, he assisted many third-class passengers up to the Boat Deck to the lifeboats. Towards the very end, Fr. Byles prayed the rosary and other prayers, heard confessions, and gave absolution to more than a hundred passengers who remained trapped on the stern of the ship after all of the lifeboats had been launched.  It was even reported that he comforted and prayed with people of other faiths while the ship was sinking.  His presence comforted the troubled crowd.  Even the Jews and Protestants were praying the Rosary with him.  (Read it about it here.)

'Continuing the prayers, he led us to where the boats were being lowered. Helping the women and children in he whispered to them words of comfort and encouragement.'
(The Evening World, April 22 1912 Miss Bertha Moran)

"After I got in the boat, which was the last one to leave, and we were slowly going further away from the ship, I could hear distinctly the voice of the priest (Byles) and the responses to his prayers. Then they became fainter and fainter, until I could only hear the strains of 'Nearer My God, to Thee' and the screams of the people left behind." - Ellen Mary Mockler


His body was never found, or even if recovered was not identified as most of the bodies taken out of sea were immediately buried without being properly identified.


Pray for the Revd Thomas Byles, for eight years rector of this mission, whose heroic death in the disaster to SS Titanic, April 15, 1912, earnestly devoting his last moments to the religious consolation of his fellow passengers, this window commemorates.

His family reportedly had an audience with Pope St. Pius X who after learning of his heroic deed said that Fr. Byles died "a martyr."

So the next time someone talks to you about the Titanic, DO NOT FORGET this priest who died, doing his duty as an ordained Roman Catholic priest and died giving his place up for somebody else.

Hmmm...wasn't that what St. Maximilian did?

Now, you know what that means.

Read more about the life and saintly heroism of the unknown priest of the Titanic by visiting the website dedicated to his life, memory and his heroism by clicking here.
Posted by AAA at 11:58 PM