Church continues fight against Bills of Death and Immorality

MANILA, Philippines - Catholic bishops are ramping up activities to oppose the passage of a controversial birth control measure a full week before President Aquino's State of the Nation Address (SONA). 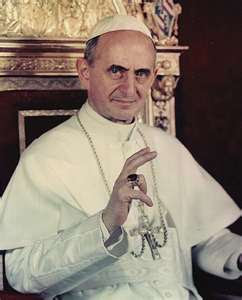 Msgr. Juanito Figura, Catholic Bishops Conference of the Philippines secretary general, said the Catholic Church is preparing several activities to celebrate the 43rd anniversary of the Humanae Vitae, the landmark encyclical by Pope Paul VI that deals with the Church’s uncompromising stand on birth control.


Since the date of the anniversary -- July 25 -- falls on the SONA, the celebration will be held in advance. [ain't that a happy coincidence?]

“We’ll be doing activities a week before that just to stay away from the SONA,” said Figura.

Aside from Humanae Vitae, the Church is also marking the 20th anniversary of Familiaris Consortio (The Role of Christian family), an apostolic exhortation written by Pope John Paul II. The document describes the church’s position concerning the meaning and role of marriage and the family, and outlines challenges towards realizing that ideal.  [and they hate that also.]

The apostolic exhortation also defines marriage "as a personal union in which the spouses reciprocally give and receive." [Oooo... homosexuals fighting for 'marriage' can misquote this.  Beware!]

During the bishops’ plenary assembly last week, Pope Benedict XVI urged them to continue protect the sanctity of life and marriage.

CBCP President and Tandag Bishop Nereo Odchimar earlier said that they will continue to speak out against the Reproductive Health bill as this is their duty to the people.

“We are the last bastion standing against the RH bill, divorce and now there is also the possibility of same-sex marriage and we won’t be surprised if after that would come euthanasia,” he said.

Beware when you talk with Catholic bashers.  They will misquote Church documents and even say that the Church's stand on contraception only became 'official' after Humanae Vitae.  Read the encyclical and you'll see that that is not true!


14. Therefore We base Our words on the first principles of a human and Christian doctrine of marriage when We are obliged once more to declare that the direct interruption of the generative process already begun and, above all, all direct abortion, even for therapeutic reasons, are to be absolutely excluded as lawful means of regulating the number of children. (14) Equally to be condemned, as the magisterium of the Church has affirmed on many occasions, is direct sterilization, whether of the man or of the woman, whether permanent or temporary. (15)

Similarly excluded is any action which either before, at the moment of, or after sexual intercourse, is specifically intended to prevent procreation—whether as an end or as a means. (16)

Neither is it valid to argue, as a justification for sexual intercourse which is deliberately contraceptive, that a lesser evil is to be preferred to a greater one, or that such intercourse would merge with procreative acts of past and future to form a single entity, and so be qualified by exactly the same moral goodness as these. Though it is true that sometimes it is lawful to tolerate a lesser moral evil in order to avoid a greater evil or in order to promote a greater good," it is never lawful, even for the gravest reasons, to do evil that good may come of it (18)—in other words, to intend directly something which of its very nature contradicts the moral order, and which must therefore be judged unworthy of man, even though the intention is to protect or promote the welfare of an individual, of a family or of society in general. Consequently, it is a serious error to think that a whole married life of otherwise normal relations can justify sexual intercourse which is deliberately contraceptive and so intrinsically wrong.