Manila’s Roman Catholic Church has warned the faithful Thursday against a fake cleric asking for donations.

The chancery office of the Manila archdiocese said the fake deacon, identified as Ritchie Verdeflor Buenavides claimed to be one Rev. Paulus Maria Sanguinis Sacris. [I did a little investigation about this guy myself.  More about this below.]

The Church issued the warning in a circular letter issued July 19 after getting the information from Bro. Francis Joseph of the Brothers of Mercy of St. John of God based in Bocaue, Bulacan warning them against the fake cleric.

Joseph, in a letter to Cardinal Rosales, said that Buenavides might use their congregation’s name “San Juan de Dios” in soliciting money for his supposed priestly ordination on July 29 at the “Holy Family Catholic Church” in Kapatiran Village, Pasong Buaya II, Imus, Cavite.

A follow-up with the Our Lady of the Pillar Parish Church in Imus, Cavite revealed there’s no Holy Family Catholic church in the area.

The 2008-2009 Catholic Directory of the Philippines also has no listing for the Missionary Society of Sts. Peter and Paul, said to be based in Manila. [Bogus Society! A quick check of the internet would show you this.]

Buenavides, who will assume the religious name of Fr. Paulus Maria Sanguinis Sacriz, MSSPP, allegedly goes around Manila soliciting donations for his ordination to be performed by Bishops Johannes Vincent Irenaeus, Jose Maria Emmanuel and Petrus Paulus, all members of MSSPP. [BOGUS!  My goodness!  Is this a priestly ordination or an episcopal ordination?  Do you need 3 bishops to ordain you?!]

There are no bishops of these names listed in the Catholic Bishops Conference of the Philippines directory. 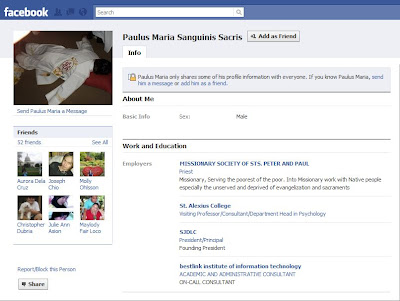 As you can see, he claims to be a member of the bogus society.

Look at his profile picture.  Notice anything?  He is lying prostrate wearing a deacon's stole.

He is also president and founder of SJDLC which, who knows what! 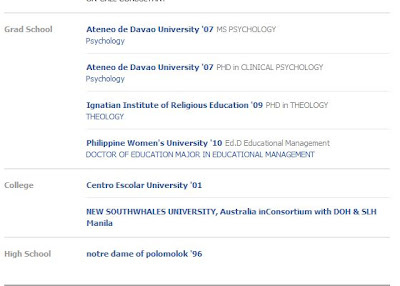 Wow! Look at that! He has 3 doctorates! In Clinical Psychology (which obviously he will need himself!), In Education Management (majoring in Imagines Diplomas) and in Theology which he would definitely receive an excommunication laetae sententiae if he attempts to simulate the administration of the Sacraments especially the Mass. I do not know if soliciting money for a supposed priestly ordination merits this.

If you notice, this guy must be very good!  Imagine he got his MS in Clinical Psychology in 2007 and got his PhD in the same discipline the SAME YEAR!

I thought of calling the Commission on Higher Education or even Ateneo de Davao University, where I once taught, to check on the veracity of this guy's claim...But...I thought to myself.  NOT WORTH IT!


BE WARNED WITH WACKOS MASKING AS PRIESTS!
Posted by AAA at 9:01 AM