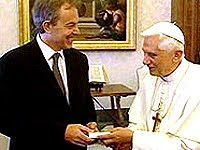 Former British Prime Minister Tony Blair has discussed his conversion to Catholicism in an interview with L’Osservatore Romano.

“My spiritual journey began when I started to go to Mass with my wife,” he said. " "Then we decided to baptize our children in the Catholic faith. It was a journey that lasted 25 years, or perhaps more. In time, emotionally, intellectually and rationally it seemed to me that the Catholic home was the right one for me. When I left political office, and I no longer had all the context connected with being prime minister, it was something I really wanted to do.”

“One of the things that has most attracted me to the Catholic Church is her universal nature. If you are a Catholic, you can go anywhere in the world and attend Mass. I was at Mass in Kigali, Beijing, Singapore,” [Imagine if the whole Catholic world was still celebrating the EF Mass.  Everywhere you go, you have the same Mass, same rubrics, same readings.  Nothing to surprise you.  Now that is something.] he added. “The fact that wherever you are, you are in communion with others is really formidable.”
***

Let us pray that Mr. Blair remains steadfast in his faith and that he remains faithful to Her teachings.  Remember that he once criticized the pope about the Holiness' view on homosexuality.
Posted by AAA at 10:59 AM