Oblates of Mary Immaculate in the Philippines' work with Indigenous People

I was alerted by this news item from the CBCP website about the Oblates of Mary Immaculate in the southern part of the country particularly in Mindanao.  My emphasis and comments, Z style.  I lifted just the excerpt. 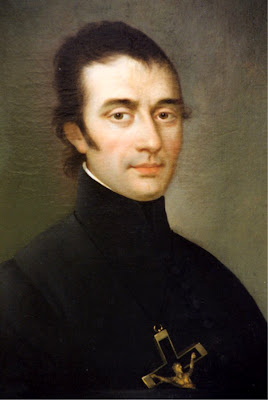 The meeting [of the members of the Oblate Ministry for Indigineous People] of concluded with the identification of some essential elements of the framework of Oblate ministry among the IPs:

1. Oblates are engaged in this ministry because the indigenous peoples are among the voiceless and excluded in society today; [not because they need the sacraments?]

2. Oblate ministry among the IPs entails living with the indigenous peoples in their specific locales or communities (inculturation; learning the language; knowing their socio-cultural-political contexts, etc.); [not because they need the saving Grace of God?]

3. The indigenous peoples are not a monolithic group, but are composed of various sub-groupings with their own distinctiveness; [duh!  we know this already.]

4. Programs for the IPs should be identity-based, [not Catholic-based?] prioritized according to importance, [how will you know which is important?] and empowering; [Vatican 2 style or liberation theology style?]

5. Oblates serving in this ministry need to be secure in their own Catholic Christian and Oblate identity, [I guess they are not secure.  Why would they have to emphasize this?] and possess an attitude of openness and interest to embrace such ministry; [Yes. I know this is hard work.]

6 Oblates in this ministry should be critical in engaging other partners and stakeholders, [wow!  business terms!] so as not to compromise our values and the best interests of the indigenous peoples we seek to serve.

The work of the Oblates in Christianizing the Muslim-dominated Southern Philippines is wonderful.  The entire island of Mindanao was under one diocese when the group of 7 pioneering Oblate missionaries arrived from America and Canada in 1939.  From the Oblates work came the first Catholic radio station of the Philippines, DXMS (MS for Mindanao and Sulu where they work and Maris Stella, Star of the Sea, a title of Our Lady); the birth of the Notre Dame Educational System where I am an alumnus; the founding of a congregation of sisters dedicated to rural catechetical instructions, the Oblates of Notre Dame; the founding of dozens of parishes thus the erection of the Apostolic Vicariate of Jolo, the dioceses of Marbel and Kidapawan, and the Archdiocese of Cotabato.

BUT as of late... most of the Oblates, I am not saying all of the, are busy with OTHER ministries other than those of the charism of their founder, St. Eugene de Mazenod.  That is the preaching of the Gospel for the salvation of souls.  I would often hear Pinoy Oblates, who I personally know, talk about their work with Justice and Peace, Indigenous People, Education, etc., but I can barely see nor feel that what they are doing is in the Light of the Gospel, following the charism of their holy founder.  I mean, look at what the earlier Oblates did.  They Christianized much of Mindanao which earlier missionaries, like the Jesuits had a hard time to do.

I remember asking an Oblate Father about this and he said, "St. Eugene's vision of Christianinzing Muslims does not work anymore especially after what the Church declared in Vatican 2.  We'll not make them Christians.  We'll just help them become good Muslims."
"Oh yeah.  Because you know more of the Qur'an than the Bible and the Catechism so you can make them better Muslims than convert them to the One True Faith!" (I thought to myself.)

This was what their founder, St. Eugene de Mazenod, said to his Oblate sons gathered around his deathbed as his dying wish: "Charity amongst yourselves and Zeal for the salvation of souls."

Whatever happened to working for the salvation of immortal souls?
Posted by AAA at 9:50 AM