FLIMSY EXCUSE FOR NOT WEARING THE RELIGIOUS HABIT 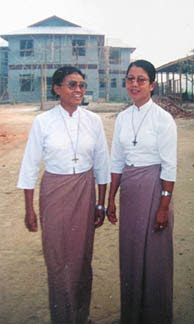 YANGON (UCAN) -- A decision by a congregation of nuns to dress in civilian clothes almost a decade ago is still not fully accepted by laypeople in Myanmar.

The Sisters of Our Lady of the Missions, [or RNDM, the first letters of the congregation in French since they are a French congregation] who mostly work in Pyay diocese, decided to discard their habit in favor of the traditional Myanmar longyi (sarong) and blouse in 2000 to better integrate with the people they serve. [better integrate?  what? you need to dress like the people to better integrate with them?  so if the sisters work in Papua New or among the aborigines of Australia... you get the picture. that is such a flimsy excuse to escape the religious habit.  I will tell you more of the story of why these sisters don't wear the habit later.]

However, their decision to wear civilian clothing is still being viewed with mixed feelings by laypeople. [hell yeah.]

Mary Ann, 65, a parishioner of St. Francis Church in Pyay diocese, said, "Although youths can accept them as nuns without the habit... I still want them to dress like nuns as they are not ordinary people. They are people who have dedicated themselves to God." [Dress like nuns!  Not ordinary people!  Dedicated themselves to God!  HAH!  It came from a lay woman! BUT obviously these sisters see themselves differently.]

Geraldine Zin Mar Lwin, 40, a laywoman from St. Paul's Parish, also in Pyay diocese, agreed. "We don't want them to dress like ordinary people as they are Religious." She conceded though that it is more practical to wear civilian dress as "the weather is very hot and humid throughout the year." [Do you dress the habit so you can be comfortable?  Tell that to the Marines!  No litereally.  Look at your soldiers, policemen, doctors and nurses.  When they go to their work, they wear their uniforms...to...BE IDENTIFIED IN PUBLIC.  Why be shy of who you are in your state of life?  They do not complain of wearing their uniforms.  They are PROUD of what their uniforms stand for.  They do not complain of the heat or humidity.  These are flimsy excuses.  The religious uniform aka HABIT is your public identification of WHO YOU ARE in the world. It is a public witness.]

However, U Aung Kywe, 52, said that "by their good example and loving service, the majority of the people in Pyay diocese now accept them as nuns even though they wear civilian clothing." [That is beside the point.  Good or bad nuns must wear the habit, as called for by Vatican II. "The religious habit, an outward mark of consecration to God, should be simple and modest, poor and at the same becoming. In addition it must meet the requirements of health and be suited to the circumstances of time and place and to the needs of the ministry involved." (Perfectae Caritatis - Decree on the Adaptation and Renewal of Religious Life – 17).]

Explaining her congregation's decision, Sister Noreen Htun, 62, said that wearing local dress helps nuns integrate better with people, and makes it easier for the nuns to "approach them and work with them." [Integrate?  Meaning people will have a hard time relating to you because you are wearing a religious habit?  Did they conduct a study that proves that people are more comfortable talking to habit-less sisters than those with the habits? Rubbish.  I find this another flimsy excuse.  Why?  My own personal exprience...I stumbled upon a priest...in civilian clothes...walking in the mall...with a young...Never mind.  Imagine if he were wearing his cassock or a clerical collar, would he have that much freedom to move around and do what he wants?  Cannot "integrate" easily, eh?]

In 1986, she started to wear a brown longyi and the traditional long-sleeve blouse while still wearing her veil. She said that when she "attended formation courses in Bangladesh and India," she saw nuns from her own congregation "wearing their own cultural dress." [The longyi is radically different from the sari of the sisters of Mother Teresa.  They too wear a traditional dress of the Indians but they have a veil and they resemble the habit of Latin rite Catholics.  The longyi is different!]

Four years later, the longyi became the norm in her congregation, except for nuns over 60 years of age. [NO!  I say it again, NO!  Why I knew RNDM sisters here in the Philippines and they ARE NOT wearing the longyi.  I'll prove this later.]

Another nun, Sister Rita Phyo recounted an incident in 1998 when they went to work in Rakhine State, where most of the people are Muslims. "At that time we were still using veils and some people thought we were Muslim women," she recalled. Soon, local superiors decided to do away with the veil "and from 2000 all our nuns began wearing the local civilian clothing -- longyi and blouse," she said. [So what if you are considered Muslim women?  Quite frankly it is beneficial.  I knew some missionary sisters in Mindanao, the Southern part of the Philippines, where majority of Muslim Filipinos live.  The sisters said that Muslims respect nuns because of the veil which resembles the veil (or hijab) of Muslim women.  Women who cover their heads are more respectful in the eyes of Muslim men since this practice is prescribed by the Qur'an.  So this is more of an asset rather than a liability.  Again another flimsy excuse that does not hold water.]

The only item which distinguishes them as nuns is a cross they wear around their necks. [Which they designed themselves.  This is how their "cross" looks like .  Looks like more of a Christmas card Star of Bethlehem to me.] 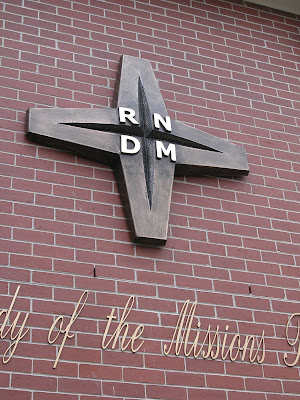 However, the change to civilian dress was not without problems. Sister Christine May, 40, recalled how five years ago when they attended a religious course in Yangon, nuns from another congregation thought they were postulants. "Not only laypeople but also nuns treated us differently," she remarked. [What do you expect?  You brought this on you.]

Father David Ba Thein, 55, director of Pyay diocese's Karuna Social Service agency said local priests prefer the nuns to wear their veils, at least during Mass. [Like all women back in the days.  It still can be done since NOT ONE SINGLE CHURCH DOCUMENT says that it is forbidden for women to wear veils or mantillas during Mass.] In his view, priests "can distinguish who they are" when they wear their "uniforms." [Exactly as I said earlier!]

Mother Euphrasie Barbier [that's her below.  Lovely isn't she?  Notice her crucifix?  Now that's a crucifix.] founded the Sisters of Our Lady of the Missions in 1861 in Lyons, France. The nuns came to Myanmar in 1887. Most worked in mission schools but after the government's nationalization policy in 1962, they began helping priests in parish work, especially in Pyay diocese. 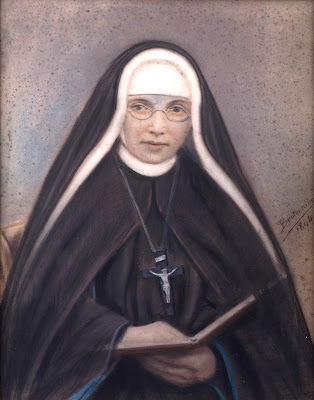 They also began poultry farms, fisheries and vegetable plantations to support their work among orphans and poor rural children, run student hostels, and work with youth and women.

They care for HIV/AIDS patients together with nuns from St. Joseph Congregation and look after leprosy patients in collaboration with the Baptists. [That's how they got their look?  From the Baptists?  Just joking...] They also care for displaced children near the border with Thailand.

There are presently 64 nuns in 12 convents in Pyay and one each in Yangon archdiocese and Mawlamyine diocese. Worldwide, there are more than 1,000 nuns. Many in other countries also wear civilian dress. 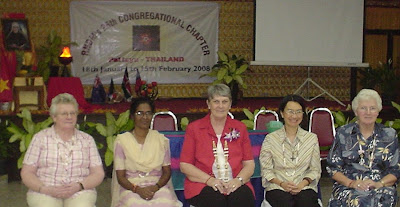 The picture above is the General Council's Meeting of the Sisters.  Notice how each has her own habit.  Not the same longyi as claimed by the sister in the interview.  The sister in the middle is Sr. Maureen McBride, RNDM, the superior general of the sisters.  She was once assigned here in the Philippines along with other sisters.  They were not wearing the longyi or any cultural dress.  They were wearing plain civilian clothes.  She was my former professor in college.  Very nice woman though.  Strong-willed woman.  I remember one time in class when my classmate said that she met this "girl", Sr. Maureen suddenly got agitated.  She does not want us to use the word girl.  It must be "woman" or womyn?  She even gave a different interpretation of the Announciation.  Really distorted.  Classic 60s era feminism.

She said that their order discarded the habit and veil because:

3) the veil is a symbol of submissiveness to the male dominated society (?!)

Radical Feminism in the Church...you know where it is headed... Click here.